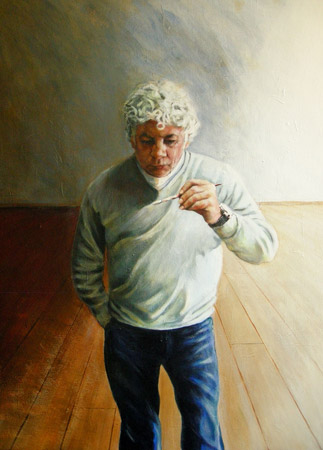 Robert Gaerthé (1959) was successfully admitted at The Royal Academy of Art, The Hague, but dropped out after a few years for his own reasons. After travelling through Europe, ending  in France with a exhibition of work made during the process, he returned to The Hague. Robert then started an advertisement bureau, “Studio Serre” (green house). After moving to Amsterdam, Robert also worked as a freelance illustrator for several bureaus in Amsterdam. Most of his time, however, was dedicated to the work found on this website.

Robert began working on portraits, surprising himself and those around him. When asked, he explained he just had to do it, and likely never had the time and the patience before. Where others hitting their fifties start chasing young women, Robert chases the older ones — their faces are more attractive to put on canvas.

Each portrait takes between 2 and 4 weeks.

Robert paints from a series of photos of the model. He prefers a more serious expression, following the traditional way of portraying.